Killing Family
The Best Game Ever!

One repeater Nerf Gun for each player (Lots of Nerf bullets)

Want To See This Through The Eyes Of A Victim?

My feet pounded the grass as I raced towards the shed in the backyard. Straining. Desperate to run faster. Away from flying bullets, the assassin, the war zone and the screaming. Away from even the laughter.

Oh, my little family and their Christmas games.

I willed my legs to run faster.

My family wasn’t normal. Holiday assassins. After eating a huge Christmas brunch. And my dad’s pumpkin pie, I could feel a wad of it in my gut as I ran. I swear he cut my slice extra big, just to slow me down.

Breathing hard, I cut around the corner of the old rickety shed. I scanned the bushes as my heart pounded. Almost safe.

“Argh.” A sharp, shocking spike rammed into my foot, hobbling me in an instant.

I hopped on one foot and skidded to a stop. Stumbling against the shed wall, I grit my teeth and grabbed the stickery nub. A goat-head burr. Really? In December! I tossed it aside.

Barefoot. Five minutes earlier, I threw my shoe past my twenty-six-year-old brother, Peter, into the rose bush. My intention, to distract. If he had brains, he would have looked.

At eighteen, even as the baby of the family, I knew to look towards the commotion. But Peter was oblivious. He almost caught me, shooting an entire clip into the sky.

“Bwahahahahaha” I sounded my evil laugh before remembering my foot. “I hate killing family time,” I muttered, not meaning a word of it, and limped around the corner. Every Christmas the nerf guns were loaded and this no-holds-barred game of assassin began.

I stumbled to the shed, took cover, and hid.

“Jeeezz, Maddie!” I jolted – then relaxed. She wasn’t the assassin. If she were, I’d already be dead.

Unfortunately, at twenty-eight, Maddie still had kick in her step. She played the game better than me, but I wouldn’t admit it.

“Hey!” I spit back. “I’ve tagged your butt a hundred times by now!”

“Whatever…” Maddie lowered her voice to a whisper, “But if you keep yelling they’ll find us for sure.”

Shit. She was right. My heart leaped to my throat. I heard the bushes rustle and pulled back into the shadows.

My dad and Peter trotted across the driveway. Teamed up. Caught and turned. My enemies. Out to kill.

They stopped by the garage door, not 20 feet away.

I whispered. “Maddie, who do you think is the Assassin?”

I peeked out, further, looking around the corner. The rest of my siblings, even my mom, wandered about. No bullets flying.

Oh no. All tagged and turned assassins, looking for us.

Dying to shoot us.

A triumphant feeling flooded through me. “We’re the last ones left.”

“We should move out.” Maddie cocked her gun.

“Okay.” I reached down and felt for the extra ammo cartridge in my back pocket. Still there.

I’d show them. I take them all out.

Excitement fueled me. I pulled the ammo clip off my gun. Checked the bullet count.

I flipped the near empty clip into my back pocket and pulled out the full one. Loaded it. Confident. Ready. I felt my lips curl into an evil grin.

“Okay, Maddie, let’s go” I perched, eyes narrowed, staring straight ahead, zeroed in on my enemy.

“Ow!” Something stung my butt.

“You shot me?” I asked, as the horror dawned.

“Who’s tagging butts now?” She smirked and shrugged, holding up her nerf gun.

“You were the assassin?”

“I’ll get you next year.” I yelled as I unloaded my clip into her butt as she sashayed off … to celebrate and eat more pie. 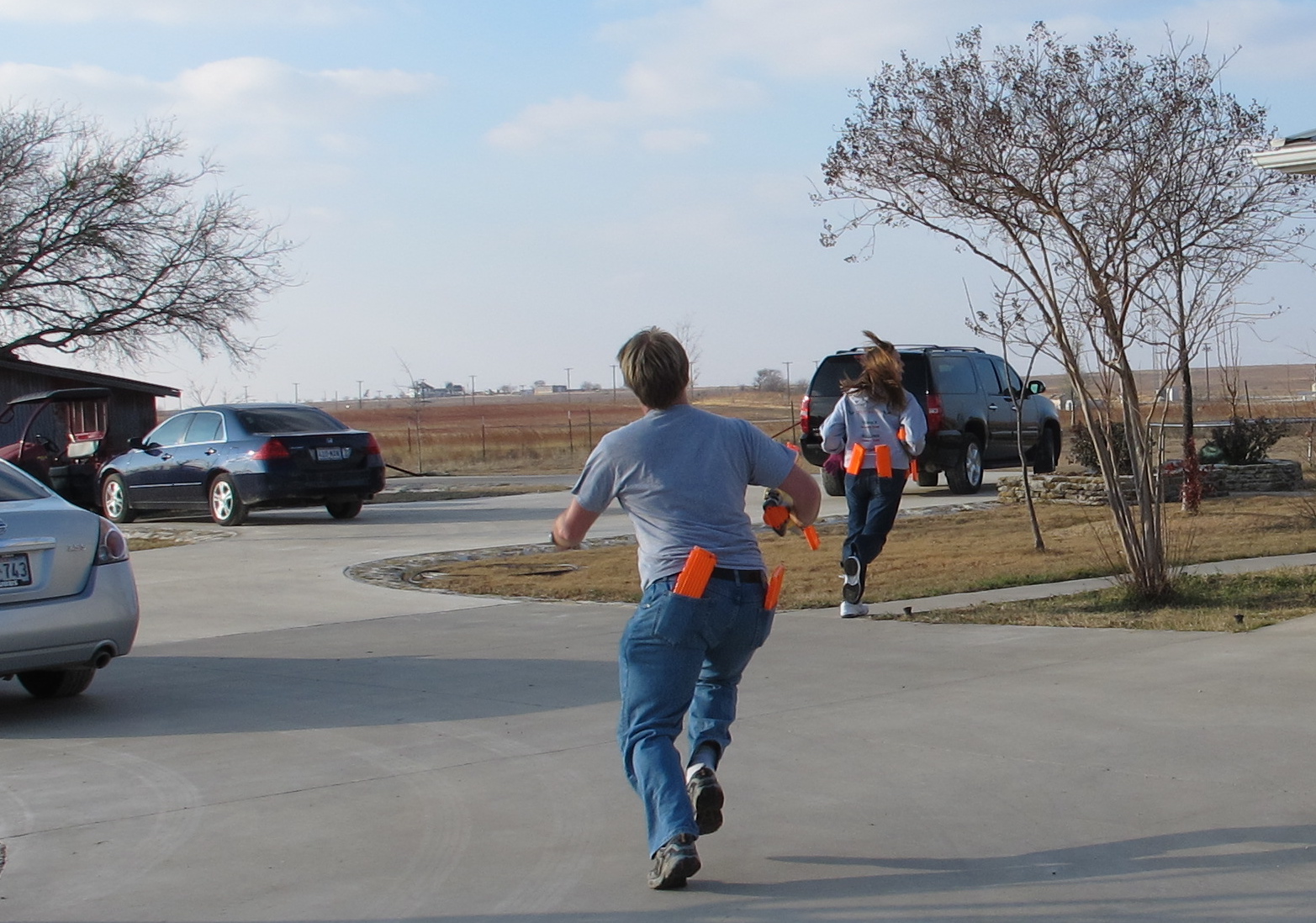 What I Do When No One’s Looking

Some Are Born Birds, And Others Have Birds...

The Time My Boyfriend Fell Asleep

Great story Mary Claire! I’ll see you get a smaller piece of pie next year.

“If he had brains, he would have looked.” Mary Claire, you are dangerous with a pen too!