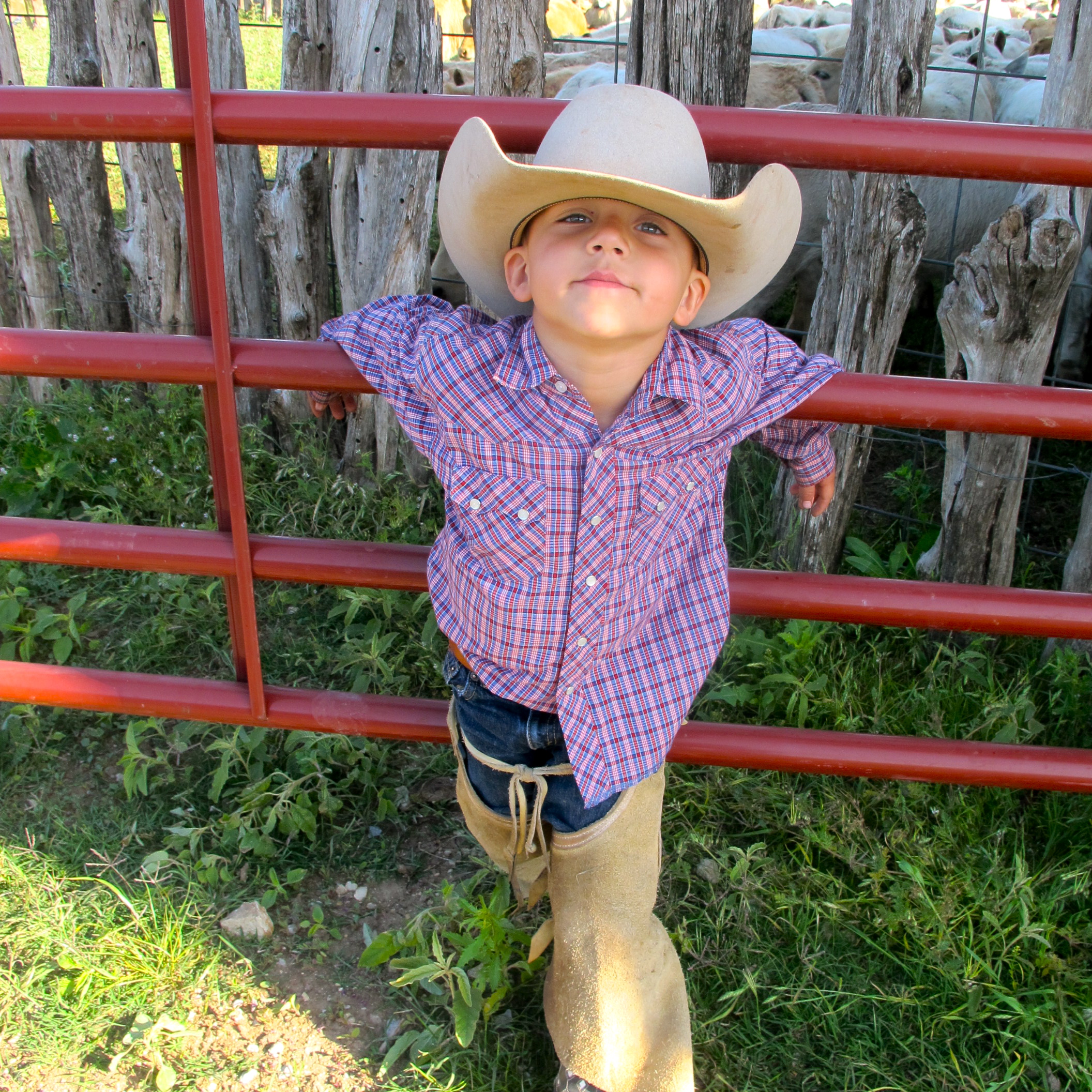 “Come on Barrett,” I said, urging my five-year-old grandson to finish breakfast. “The cowboys have already driven the cattle past our house. They’re almost to the pens. We need to get moving or they’ll start branding before we get there.”

Barrett leaped up, grabbed his cereal bowl, put his lips on the rim and chugged. Cereal, milk and – I swear – a whole strawberry vanished. Then, with a quick swipe of his hand across his mouth, he said, “Let’s go Grandma,” and ran out of the house.

Kids. I rolled my eyes. What was it about cowboys and cattle that made everyone, including me, react with glee?

Five minutes later, we pulled in front of the corrals, parked and walked down the holding pens. Well, I walked. Barrett ran straight to the pipe gate and climbed on. 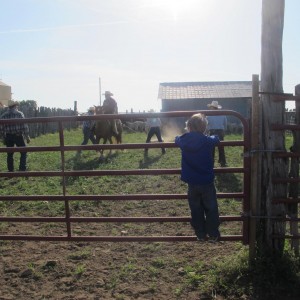 I trotted up and squinted, following his gaze.

There, amongst the nervous, protesting cattle, were nine or so cowboys. All wore sweat rimmed hats, leather chaps, spurs and jeans. A couple rode horses, but most were on foot. Smoke billowed from a metal pit. The long handles of the branding irons hung out of the fire. The ranch foreman barked an order, spooking the calves, causing mass hysteria. Each cut and ducked in a vain attempt to disappear into the herd. Dirt, pounded to dust by hundreds of hooves, swirled in the air. But that was not what caught Barrett’s attention.

It was the little, six-year-old kid standing off to the side. Outfitted like the rest, he was part of the ‘in’ crowd. 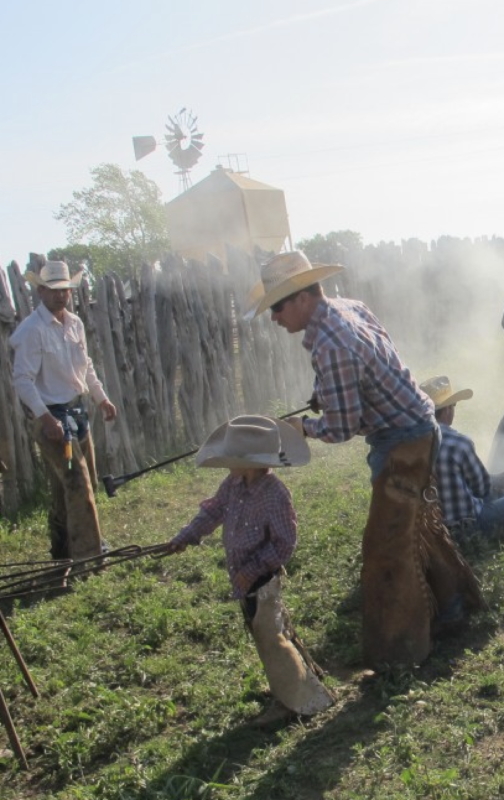 One of the cowboys on horseback swung a rope around his head, a couple of times, then let it fly. It landed on a calf. Like a noose, he pulled it closed. Then he backed the horse up. The calf gasped. He jumped and jerked against the rope, struggling to stay with the herd. But the cowboy was relentless. Within seconds, the calf was subdued and on the ground. Five cowboys descended on it, two holding it down. One vaccinating. One branding. One cutting. Smoke billowed. The calf bellowed and it was over. The cowboys walked away. The calf got up. Confused and shaken, it ran away. 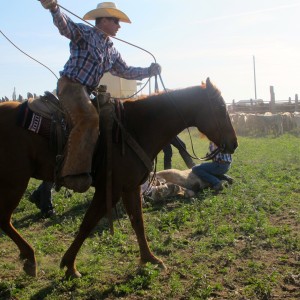 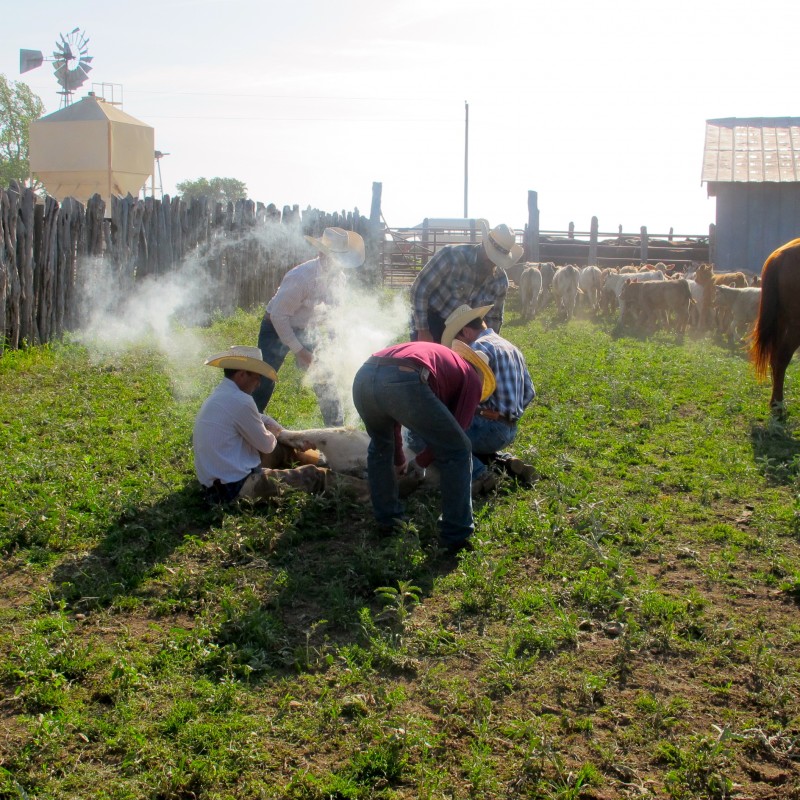 Barrett and I watched fascinated.

This went on for another 30 minutes.

Then, the kid, who up to this point seemed to take no notice of us, sauntered up to where we stood outside the gate.

“Look here.” The kid jammed his hand through the pipe on the gate. “This is a bull’s testicle.” 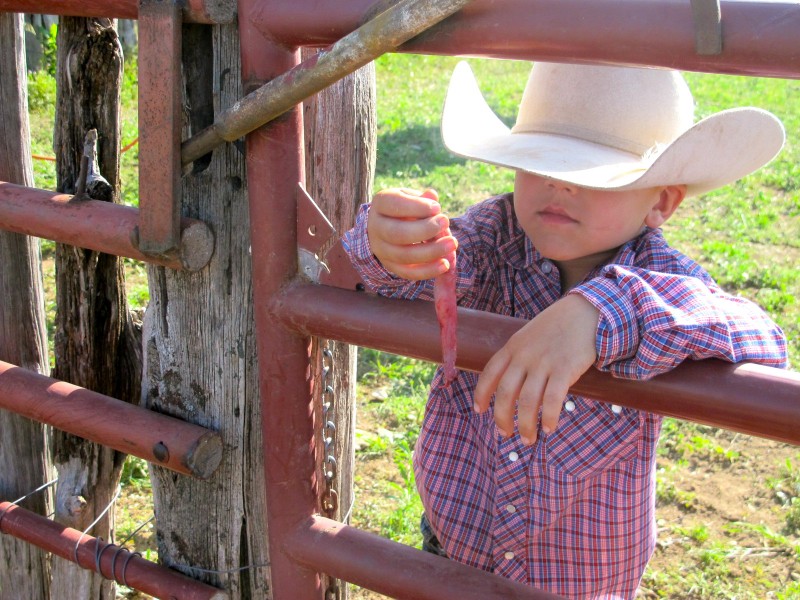 He opened his blood-covered hand. Sure enough, there was a mass of pale colored guts.

Barrett’s mouth dropped open. He took a step back.

The little cowboy saw, suppressed a smile, and squeezed the piece of meat until goo oozed out all over his hand. 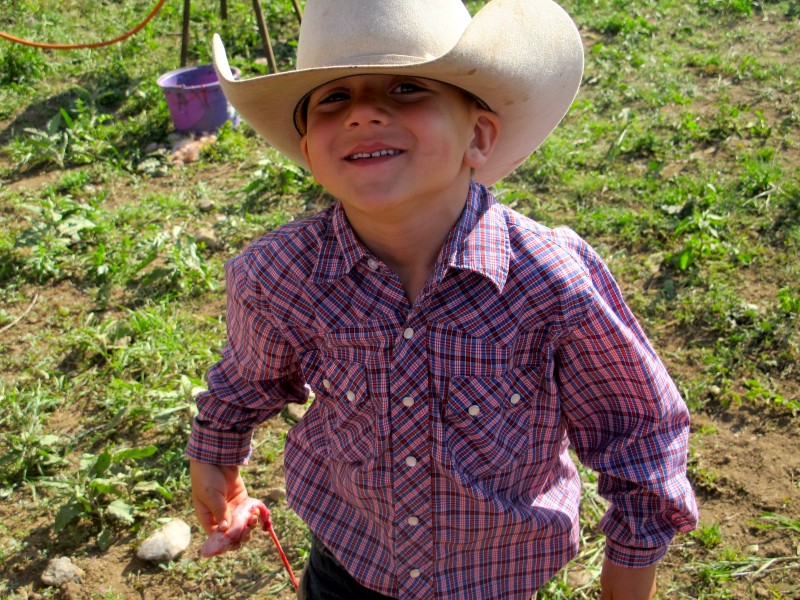 “They pulled that out of the––” Barrett swallowed hard, “calf?”

“Yep. Just grabbed it and pulled it out.” He grinned and shoved the testicle closer, into Barrett’s face. “You can eat this.”

The kid cocked his head, scratched, then walked over to the aluminum bucket that was set a couple of feet away from the cowboys. He reached in, grabbed something and headed back to us.

“See this?” He stuck his hand through the bars again. “This is an ear. They notch them. It’s not worth anything. You can’t eat it or nothing.” Then he threw it on the ground and kicked dirt on top of it.

“Are you just going to leave it there?” Barrett asked.

One of the cowboys on horseback pulled close, pushed his hat back and gave the kid a hard stare.

Their eyes locked. A moment passed. Then, without either saying a word, the kid walked over, picked the ear out of the dirt and threw it back in the bucket.

The cowboy gave a slight nod, turned, and went back to roping.

The kid walked back to the gate, looped an arm through the pipe and rested. 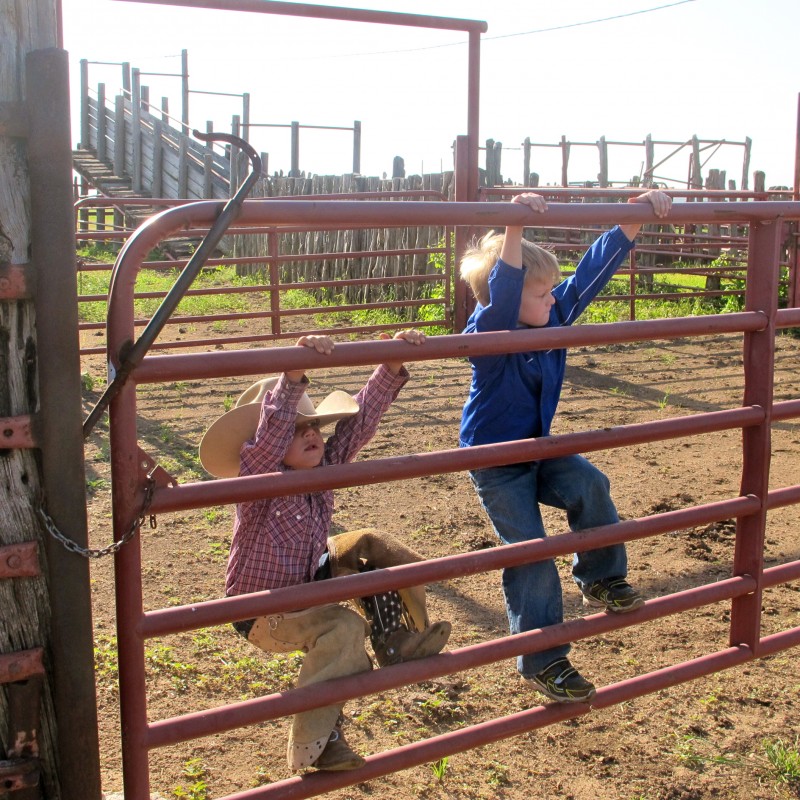 Then, everyone watched for a while. The cowboys roped one calf after another, dragging them, kicking and bucking out of the herd. One time a calf broke loose. But it didn’t get far before they’d wrestled it down.

So things got kind of boring.

That’s when the kid snapped a glance at me. Then, he gave Barrett the slow once over.

He must have liked what he saw because he shoved his hat back and said, “Ya wanna go wander around? I saw some cats in the barn over there. Bet we can find some mice if we look hard enough.”

They took off. Barrett, the city kid and his new, pure country friend. Laughing and talking like best friends who’d known each other for years.

They never even looked back. 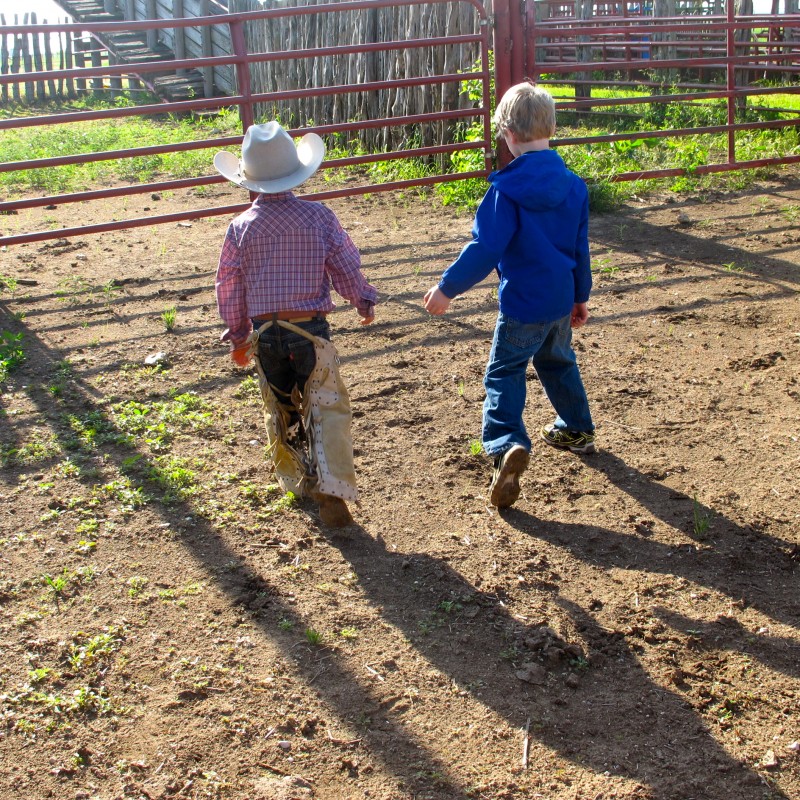 I can remember when I was about his age , we were going to work cattle . I had no idea what they were going to do, I couldn’t stand the blood, smell of burning hair and flesh, I went to the car and listened to the radio. It was many years before I returned and actually helped. Karen love your stories!!!!!

Another great story. You see things in events going on around you that I don’t think many see.

What a nice compliment! Thanks Great GrandDad!!!!!

I totally love what you wrote!!! I wish my grandkids and great grandkids could experience what you have written!!! Maybe one day!!!!!

I never expected to end up on a ranch. Maybe, one day, it will happen to you too!