All In A Days Work If You’re A Cowboy/Hero “Kathy, you said you wanted to come. There’s a baby being born. But the mom – she’s struggling. Probably going to have to pull the calf.”

There it was… No ‘hello.’ No ‘sorry to call so early.’ Just straight to the issue at hand. But I never had any doubt who it was, our ranch foreman. His Texas twang was unmistakable, even through the phone.

“Great,” I said, suppressing a groan.

A quick glance out the window told me the day was as dismal as the weather guy on TV was saying. Cold. Sleet and snow. Icy roads and frozen overpasses. I, of course, was still in my PJ’s, drinking coffee. Hadn’t even brushed my teeth, much less put on my make-up.

“Give me 10 minutes to get dressed.” I started to hang up, then stopped. “Ahhh, where are you?”

I searched my brain. Pasture 4. Damn. “That would be the pasture by the…”

“Go straight south from the headquarters, go past the tank, up the hill and you’ll see my pick-up.”

His voice dripped with irritation. After 10 years on the ranch, he expected me to know the pastures.

“I’ll find you.” I hung up, not at all sure I would. Ran, threw on some clothes, decided against putting on my face. (That cowboy wouldn’t wait for me.) Jumped into the jeep and raced off to find him.

By the time I got there, that cowboy had already un-trailered his horse. Snow swirled. It was so cold that all the fat in my butt had already frozen.

As usual, he looked overjoyed to see me. 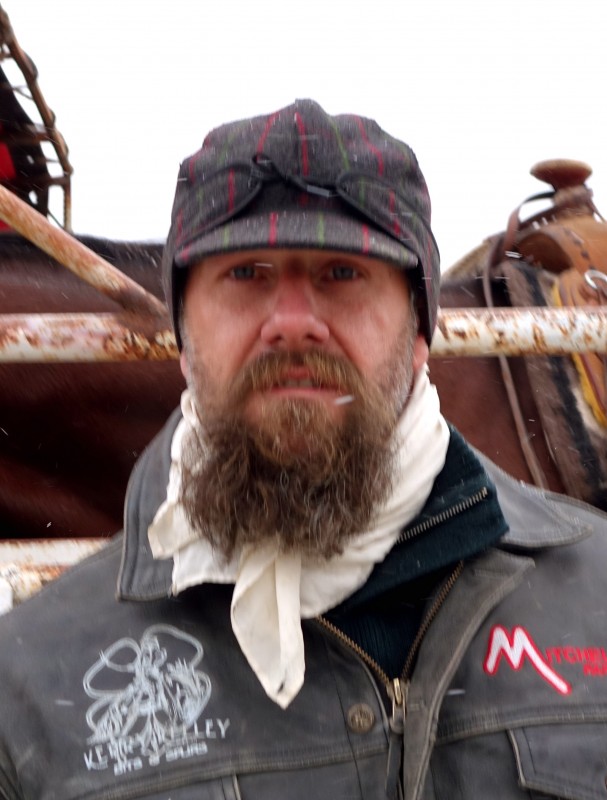 “I’m gonna try to get her up to the barns. Things will be easier for her if I pull it there.” He said, as he mounted his horse and rode off.

I had a thousand questions. The biggest being – how did he know he was going to have to pull the calf? But, I knew better than to trot after him and ask. That would be interfering. that cowboy had a low tolerance for interfering.

Plus, his bark was a mite unsettling.

So, I took off after them, staying a safe distance behind. 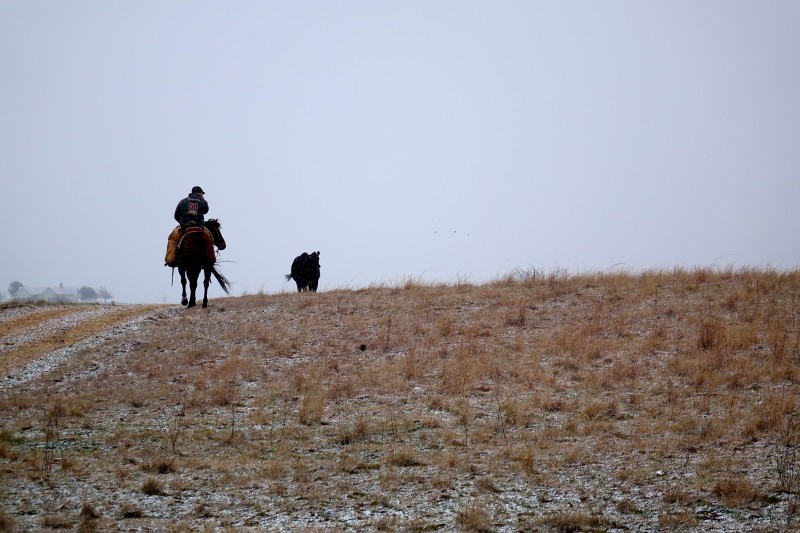 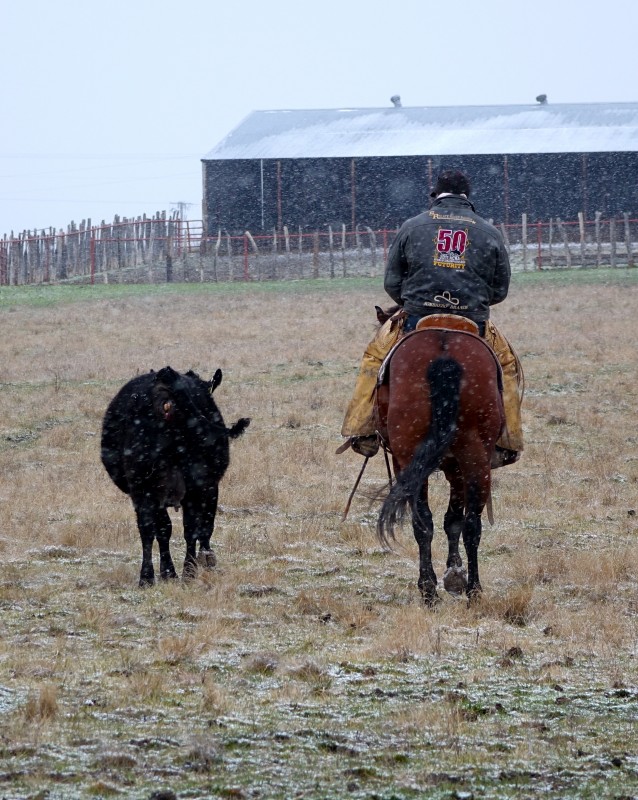 With great gentleness, the kind I never expected to see out of that cowboy, he escorted her to the barns.

Seeing the calf’s hoof peaking out of the mother, I flinched with every step that momma cow took.

I realized she’d suffered for hours.

I stood silent while he moved her into the shoots and prepared to pull her baby.

Right before he began, he turned to me and said, “Now look. I don’t want you to hate me if this doesn’t turn out okay. If the calf doesn’t live. If Momma doesn’t make it. And I sure don’t want you passing out on me or anything. Okay?”

He gave he a searing look.

“I won’t. I promise.” I understood this was a life and death situation. I started to pray. I prayed that the calf would live. I prayed the momma would be okay. And, I prayed that he would be as good of a cowboy as my husband said he was. Then, I stood back and watched him perform a miracle.

(WARNING!!!  Do not read any further if you do not want to see photos of this calf being pulled.) 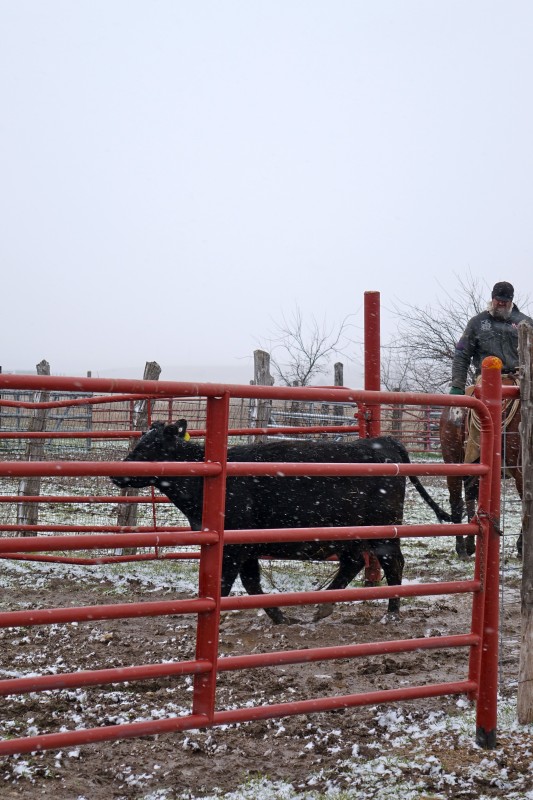 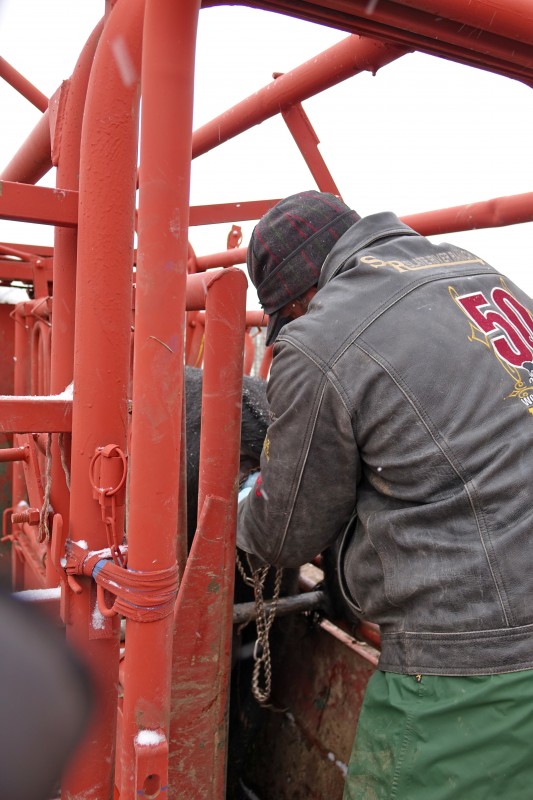 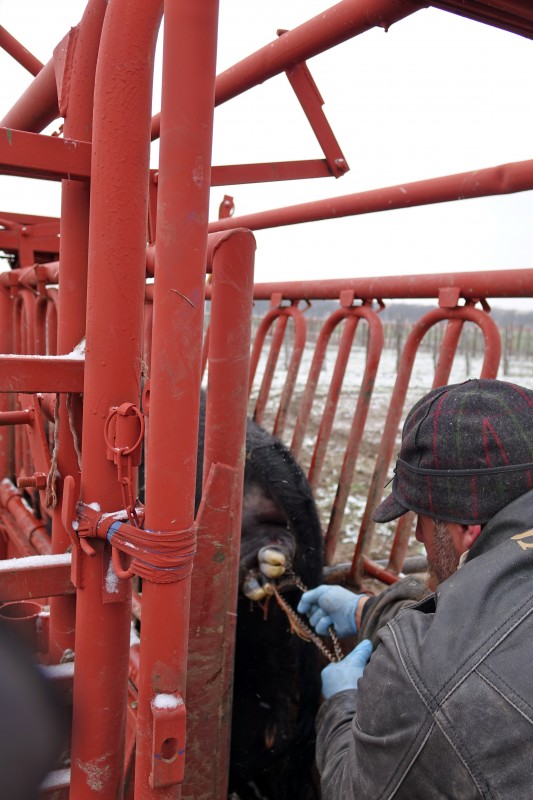 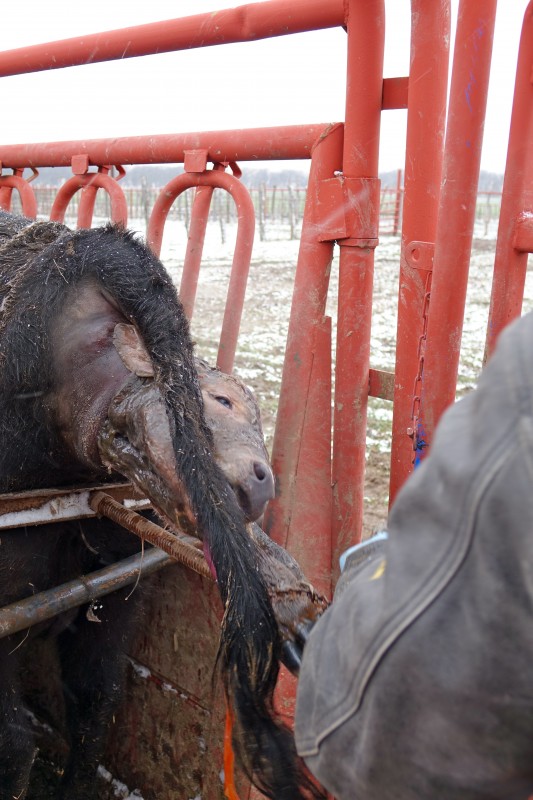 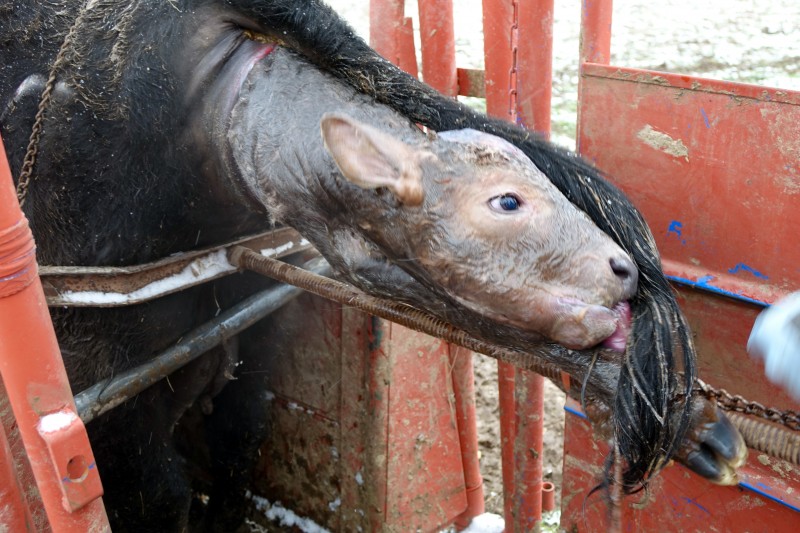 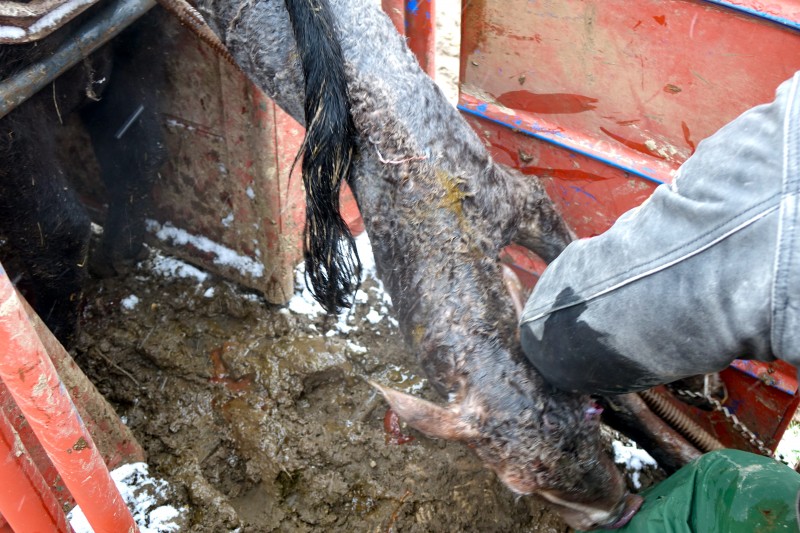 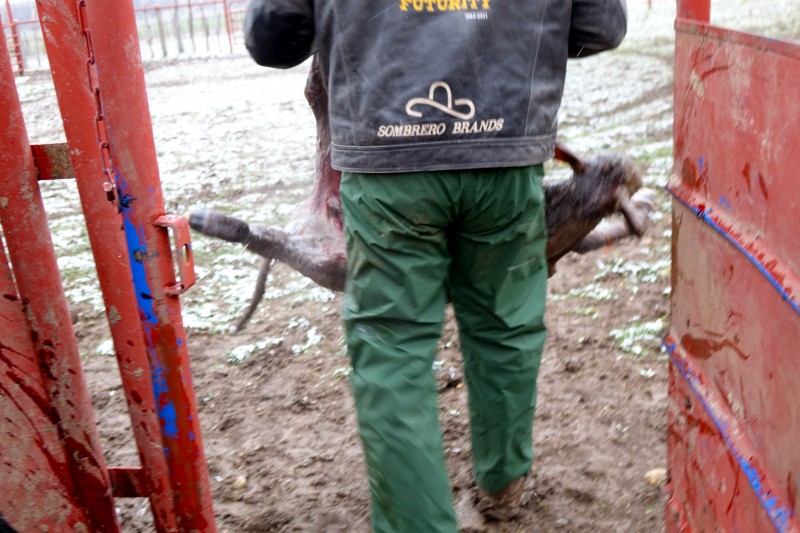 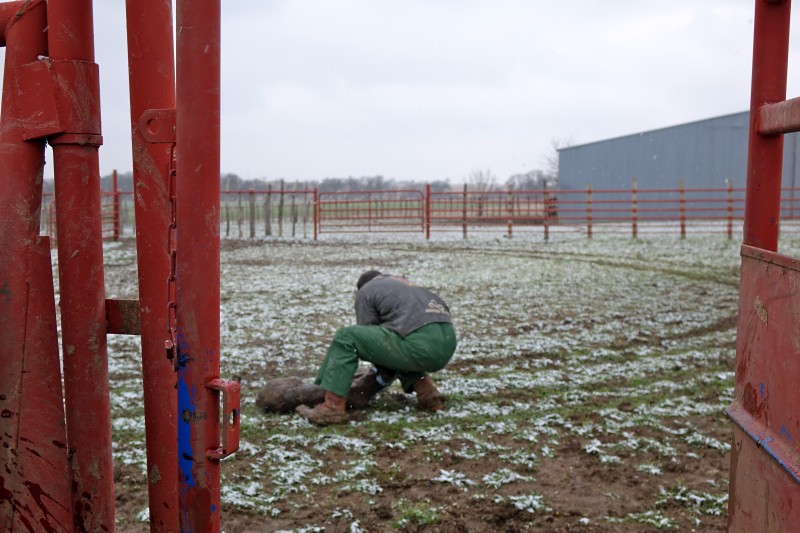 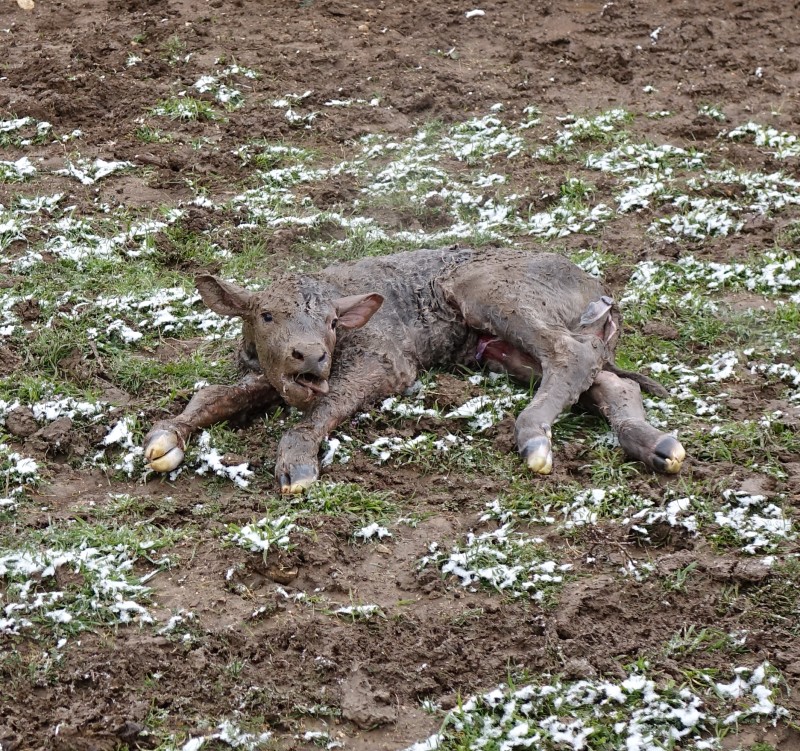 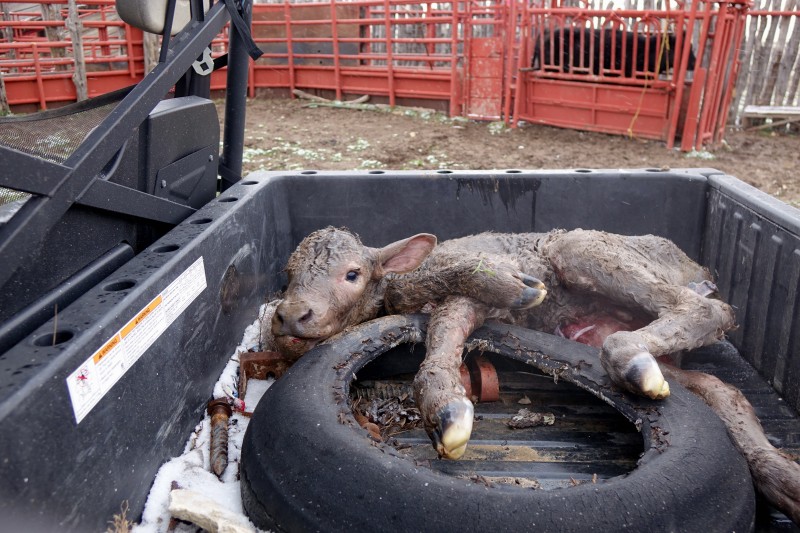 I don’t think I breathed once.

After it was over, I thanked God, that cowboy the Mom and the baby calf.

The next day, I slugged through the snow to check on Momma and baby.

Here’s the difference a day makes… Same calf… And Momma was feeling better. Enough to make sure I didn’t do anything to her baby! 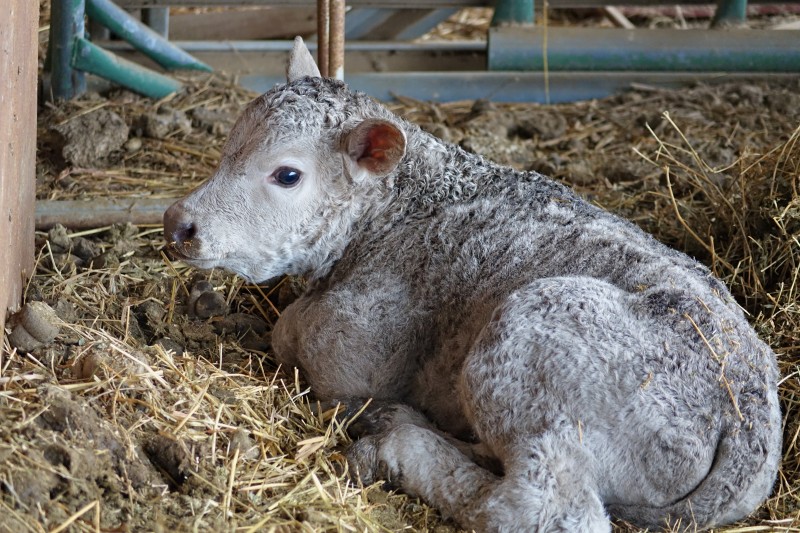 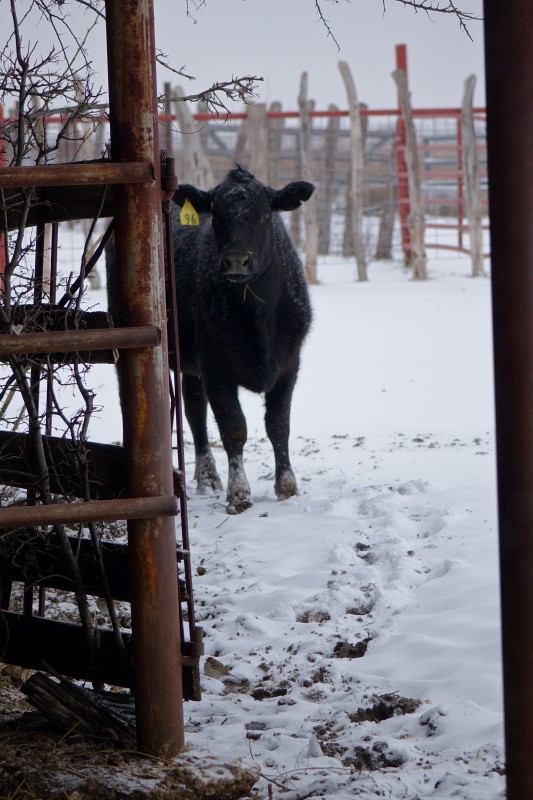 As for that cowboy, he already had two more momma cows put up in the weighing station. Said, “they weren’t feeling good.” He’d already doctored them. And he was heading out to check the rest of the herd. Because… that’s what he does.

Shipping Day At The Ranch Step One –...

The Ranch As You’ve Never Seen It Before

Everybody Loves A Cowboy(And Mitzi)

Great we have to pull calfs , beef and dairy cows he was your hero on that cold messy bone chilling day great pictures

I couldn’t have done it… I just stood there gaping!

I think I might have just fallen in love with Buster.

I think that makes you brilliant!

Love this, Karen. Glad I missed the sounds and smells! Beautiful calf.

Thanks Katie! Hope all is well down under!

WOW; WHAT AN EXPERIENCE!!

I grew up around animals but never saw this before …………

I have been around this kinda stuff all my life and Buster did one heck of a job. Cause more times than not you will lose one or the other or both. So that goes to show you GOD does answer prayers. Awesome job Buster you are a hero!!

It was truly one of the greatest things I’ve ever experienced!

Karen, I apologize for not telling you in my comment above that you did a awesome job writing and telling about this. You also took some awesome pictures. Keep up the good work. I enjoyed it very much.

When I didn’t save the calf, comfort the mom or do anything but get underfoot ~ it’s okay not to compliment me! (But thanks anyway!)

I have known Buster many years he is an amazing man and Cowboy.

Karen, thanks for this lovely story. Buster is the son of my cousin. His dad is, and his granddad was, fine men as well. Buster comes from good stock! Thanks again for sharing.

Hi Gwen, I’m delighted you enjoyed it. This story happened exactly as written!

I am so relieved the story had a happy ending! Fantastic cowboying and writing.

Me too! Thanks Rachel!

What a painstaking job on such a cold day !!!! But prayers were answered and he was the big hero…beautiful cow mom and calf…so wonderful!!!!

I was not able to get to sleep so started scrolling through my phone and found you. Thank you for your blog!! I am so glad I found you and your Wonderful sense of humor. God Bless you & yours. I will go to sleep with a smile.

What a wonderful message to wake up to! Thank you! I hope you slept well!!!