How To Potty Train A Boy In A Day — Really! 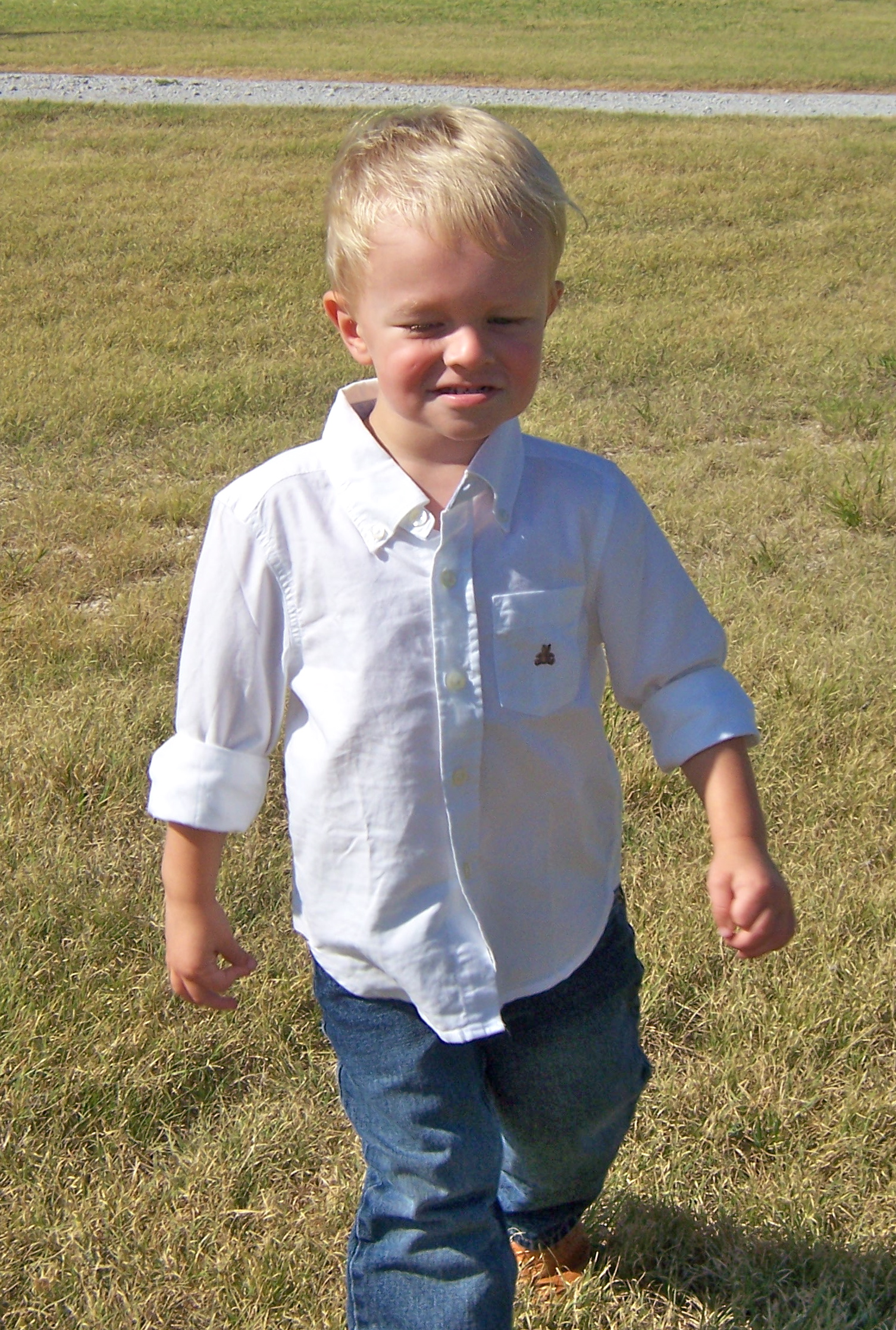 “We’re in the bathroom.” I yelled, trying not to sound aggravated. Then I slopped the mop back across the bathroom floor.

“Yea PopE, we’re back here.” My grandson, Barrett, age 4, chirped like a happy little parrot from the tub.

Barrett was enjoying his third bubble bath of the day.

I growled when Henry rounded the corner.

He stopped, made a quick assessment and grinned. Then, knowing he’d just irritated me more, he leaned in and gave me a kiss.

“So… it happened again?”

“Yes.” I growled. “The kid is like a fire hose out of control. Never seen anything like it. Sprayed the walls, the floor… even got me…not a splash in the toilet bowl. No wonder people hate potty training boys.”

“I’m glad I only had girls. They were bad enough.”

“It’s not funny.” I snarled, swirled the mop around the floor, then popped it in the bucket. “Next time you can clean it up.”

“Want me to take over?” Henry asked. “I can have this problem solved in a day.”

“I’ve been working with Barrett all week,” I sputtered, “and you think you can get him potty trained in a day?”

“Well, Mr. Confidence, go for it.” I picked up the mop bucket and flounced out of the room. But not before adding, “But when Mr. Elephant Bladder goes airborne, you’re cleaning the mess.”

An hour later, Barrett grabbed the front of his pants and jumped out of his chair. “Gramma, the tinkle is coming.”

“You’re up PopE.” I smirked, envisioning the impending disaster.

“Come on Barrett,” PopE said, getting up. “We’re going to play a game.”

“What game?” Barrett’s forehead knotted, but he didn’t let go of his crotch as he did a half-skip to PopE’s side.

“Come on, I’ll show you.” PopE took Barrett’s free hand and they trotted off to the toilet.

“Gramma, that was so much fun. Can I do it again?”

“You want to pee in the toilet? Again?”

That never happened. I looked from Henry to Barrett, and back again.

“Yea. Uh-huh. Can I?” Barrett bounced up and down in front of me.

“How’s the bathroom?” I asked Henry.

“Clean as a whistle.”

Not believing a word of it, I got up and checked.

“It’s all about the Fruit Loops.” He grinned. “I tossed a handful into the toilet. Told him to stand on the step-stool, take himself in hand and shoot the pink ones.”

“Yea,” Barrett bounced faster. “And if I go a week without missing the pinks, I get a Sheriff’s badge. Isn’t that great Gramma?”

Dumbfounded, I nodded at Barrett, then blinked, disbelieving, at Henry. “So, the toilet training issue is over?”

“And all I have to do is throw Fruit Loops into the toilet?” I narrowed my eyes, still in disbelief.

“But Grandma,” Barrett shoved his face into mine. “I’m not eating Fruit Loops for breakfast any more.” 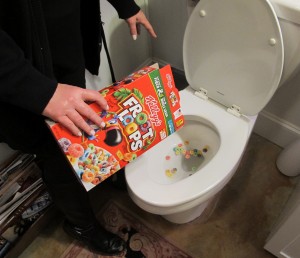 Best way to potty train a boyflunking familyHow To Potty Train A Boy In A Day!Karen EkstromPotty Trained in a Day
12 comments 1 FacebookTwitterPinterestEmail

Everybody Loves A Cowboy(And Mitzi)

Recreate Yourself on Your Front Lawn! Rock n’...

Give Your Child A Fairy Godmother… Here’s How!

Liked the story and the idea! HMMM!

What can I say… It worked. But, I will never look at Fruit Loops the same way!

What about the pooping part. That’s what we are having trouble with. He knows he’s got to do it because he goes and squats down under or behind a table or something

Put glitter in the toilet. (Do it a couple of days in a row) Tell him it’s fairy poop… And they’ve come to help him. To inspire him. To get him to join his poop with their’s… so they can be fairy-friends together! And if doesn’t poop in the toilet, he will be saying no to being a friend to the fairies – and everyone wants to be friends with the fairies. (Believe it or not, this has worked lots of times – for lots of my friends. But after he does it, you need to have fairy candy or something that the fairies leave for him… that he finds… and knows it’s from them… as a thank you.)

I used rewards for all three of my kids, usually jelly beans, 1 jelly bean for #1 and 2 for #2, all my kids were really easy to train this way, my oldest son was trained at 25 months, my daughter was 21 months and my youngest son was 23 months, just gotta make sure you introduce it early enough before they become defyant, and make it as fun as possible, do the happy dance, make up a potty song, works like a charm!!

Hey, I’m for anything that works… For us… It was “Hit the Fruit Loops”… One time… He loved it… And we were done!

I love this idea. We start potty training next week and fruit loops are on the list of supplies

It works! Makes boys want to hit the toilet!!!

My grandson is 3 1/2 and does not want to have anything with the toilet or potty chairs. I get him to sit on the toilet and nothing happens then 15 minutes later he pees or poops his pants. HELP

Make a game of potty training. If you can take him outside without offending the neighbors, let him pee on a tree. Draw a circle on the concrete. Pee on a flower. etc. Take away the stress. Let him see he has control. Do this multiple times. (Have you ever tried to go to the bathroom when everyone is looking at you? And you’re under stress? It’s hard. And you’ve had lots of practice!) Then, take him inside and reintroduce the potty. Put fruit loops in it and have him try to hit them. Above all, make potty training fun. Because you get a lot further and you will be less stressed if your grandson wants to cooperate! Good luck. Let me know how it goes!!!… (And, if it doesn’t go well, it might be because he’s just not ready yet. Let him get a little older.)

When did you stop with the fruit loops and did that change anything? For example did he regress? Did you have trouble teaching him to sit for a BM?

We kept the fruit loops there, in a bowl, until he tired of them. And no, he kept hitting the toilet and didn’t regress. As for the BM training, that took more patience because it wasn’t fast. By that I mean he wasn’t big on waiting for things to come… But, we told him those were big bombs and that helped…