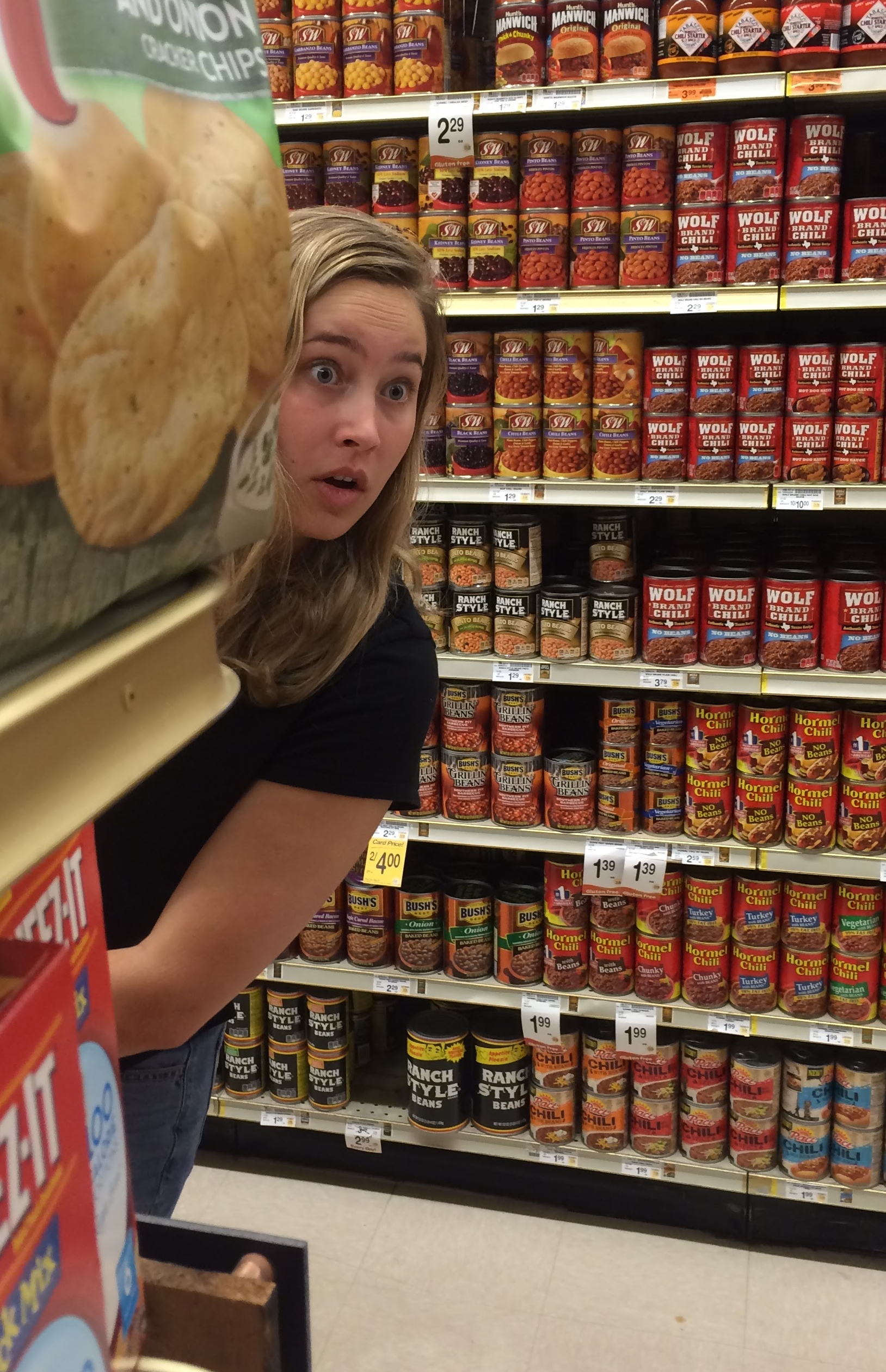 There she was. Margaret Ann. Attacking another mother. Right by the banana bread in the main boulevard of the grocery store. I felt the hair on my neck rise. I jerked back, dashed one aisle over and hid, down by the donuts. No sense in letting her find me. But, I really had to hear…

“Last year you helped with our 2nd grade rendition of Pride and Prejudice. Yes, we put up with a lot of flack. Sometimes that happens with small-minded people. But we persevered.”

Oh Lord. I shuddered. Last year. What a nightmare. I refused to get dragged into that muck again.

Margaret Ann’s voice rose an octave. “Now, it’s time to organize this year’s play. But I see you didn’t sign up…”

Thank goodness I saw Margaret Ann before she saw me.

I peeked around the hoho’s.

Margaret Ann’s back was to me. I watched her thin arms jerk about as she implored, demanded, and cajoled the other woman. Mesmerizing. Even from here, I could see her pink workout top trying to grab at something- a pudge, a pooch, even some back arm fat- but finding nothing.

Margaret Ann was “The Parent.” The professional volunteer. Over-involved in everything.

While I, on the other hand, being one of the “lesser” parents, was busy holding down a full-time job.

Don’t get me wrong, I volunteered. I did my part.

I worked a three-hour shift, in the dreaded corny dog booth (aka. peon booth), with three other working moms during the annual Kid Carnival. I’d been assigned to that booth for the last four years.

Afterwards, I reeked of grease for two days. And the splatter burns lasted for a month.

Since then, I’d learned.

Now, I avoided Margaret Ann every chance I got.

And, ignored her emails.

All seventeen of them.

It wasn’t that I was scared of her.

I just didn’t want to get involved in the parental politics.

The latest dispute was between Margaret Ann and the spunky pilgrim parade chair, Patsy, who I really enjoyed. Her buttery figure and grandmother attitude made me feel that all she needed from me was my best effort.

I was Team Patsy.

Suddenly, Margaret Ann softened her voice a little. “Is there a problem?”

“N-no… i-it’s just that… I have a big project due at work…. ” the woman answered, nervous and loud.

I leaned out further.

I jerked back just in time. Grabbed my grocery cart and scooted behind the cupcakes.

Do not turn around…

“Well…” Margaret Ann continued, “I didn’t realize your job was more important than your children.”

“Great! I’ll put you down for a meeting next Tuesday.”

“Uh… okay… See you then.” I heard the wheels of the her grocery cart squeal as made her escape.

I jumped into gear, and walked-ran down to produce.

I heard the swift trot of Margaret Ann’s cart.

Here we go. I took a deep breath. I can do this.

“Yes?” I wheeled my head around and beamed.

Our eyes locked.. Our carts shimmied in, next to each other.

Once close, I halted my cart, walked to her, then, I locked my legs in place, like the soldier for the Patsy-lovers that I was.

I stretched out a hand into the space between us. Then, smiled and said, “Please forgive me but I have forgotten your name.”

Her chin drew far back into her neck. Her slimed lips were barely parted, still glued together in the corners. She let out a hesitant “Ahh…”

After lifting her finger, she added, “Margaret Ann Johnston,” and forced a smile.

I locked my knees. Don’t give in. Don’t surrender.

“Oh,” She paused, and gave my hand a delicate squeeze. Then, composing herself, she added, “I’m the room mom for Ms. Chelsea’s class, I’m sure you’ve heard of the Third Grade Cheese and Grape Juice Night coming up?”

My knee caps gripped my thighs. My head started to feel dizzy, but I powered on. My soldier stance was working! I was positive my threatening stance was winning this for me.“I thought that was Patsy’s thing-” the room went white, and my head spun. I trucked on, determined, not changing my fighting stance, knees locked and loaded in place, I would not let Patsy down, “That Patsy, she’s always-”

And then, apparently, my body flopped to the ground.

As it turns out, (as I later discovered) locking your knees for long periods of time has that effect on people.

I didn’t remember falling, but when I opened my eyes, a bunch of people crouched around me and… Margaret Ann’ s face was right in mine…

Her eyes wide. “Oh my goodness! That was the strangest thing. Kathy…” she took my hand, “You just fainted. But don’t worry, hon, I remember what you said right before you went down, and I’d be glad to put your name down for the corny dog booth next year. I’ll even let you run it.”

She winked, stood, and loped away with her cart.

That is absolutely awesome! Didn’t see that ending coming. I laughed out loud!

So glad you laughed! Thanks Sherri! That makes my day!