“Oh. Good Lord.” The interior decorator snatched three picture frames off the coffee table. Turned, saw five more family photos mixed in amongst the books on the bookshelf, charged over and grabbed those too.

“Here.” She thrust them into my arms. “Put those somewhere else. Like in a private bedroom or study. Where they’re not the first thing people see when they come into your house.”

Then, she marched into my dining room.

Leaving me with an armful of family photos and wishing I hadn’t “won her” at the charity fundraiser.

Yep. I’d been the high bidder. Even though I’d only bid 50 bucks. Which was the minimum opening bid.

Then, nobody bid after me.

Which I thought was weird at the time. But now was becoming clear.

I clinched my teeth and followed after her.

“Ahhh, I don’t want a show house that looks perfect. And that is so decorated out that you can’t tell who lives here.”

She stopped. Gave me a bless-your-heart smile and said, “Honey, you’ve just got to trust me. I know what I’m doing.”

Then, she flung open the door to the guest bathroom and gasped out a, “How quaint, a statue of John Wayne.”

Heat rushed to my face.

“I hate that statue. But, Henry loves John Wayne. He insisted I keep it. So, I relegated it to the bathroom. Which, I thought, was kind-of clever but…” I shrugged.

“Well,” the decorator shut the door and gave me a tight smile. “It’s certainly unique.”

Then she walked into the kitchen. “Wow… More family photos.”

I got her out of the house pretty fast after that.

But, as she was leaving, she left me with one piece of advice.

“You really should group all those family photos together, in one spot.”

(Or I got Mary Claire too.)

And the result was fabulous! 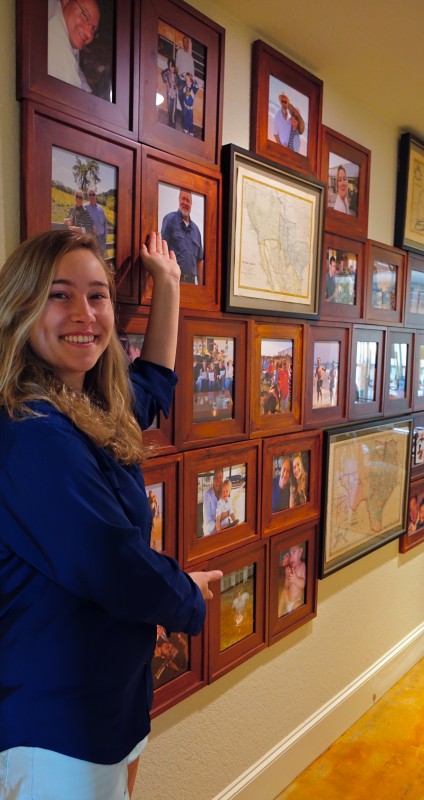 Everyone stops and looks at it on the way the guest bathroom.

Then, they lavish me with praise.

And gush about how great it is.

Even the kids’ friends stop and look.

Yes, it was a winning idea.

Worth every bit of the 50 bucks I paid.

And, because the wall is so fabulous, nobody even notices the John Wayne statue in the bathroom.

*So, if you have a long boring hallway, use it!

Turn it into a walkway of love filled with special pictures and proud moments.

You Know You’re In Trouble When…

Decorating with Flowers ~ For A Grand Party

Pull Out Your Crystal And Put It To...

The Procession of the Virgin of Guadalupe

I did this with the hallway in our Houston condo, however, I may need Mary Claire to come re-arrange all the frames on the wall. Hers looks so much better than mine!

Taking a bit of family with you on the new move! Love it! Hope to see you and Robert soon!